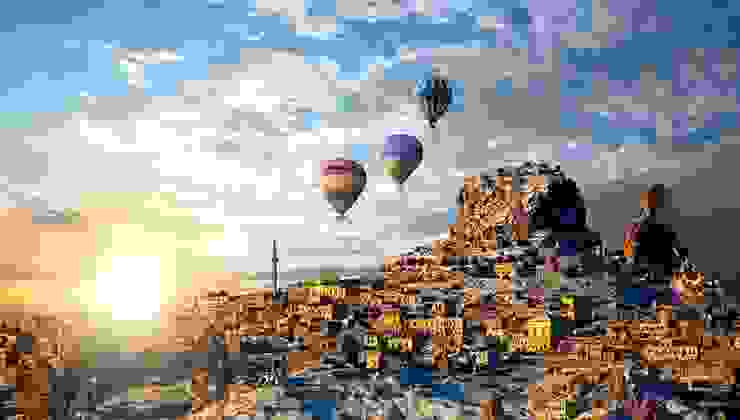 CAPPADOCIA, in other words KATPATUKA, Land of Beautiful Horses Cappadocia is one of the flowers of world with history, geography, and culture it has. Hence this extraordinary feature has drawn attention of the world and has been included into World Heritage List by UNESCO in 1985. Turkey is one of the nine countries taking place in World Heritage List.

The earliest record of the name of Cappadocia dates from the late 6th century BC, when it appears in the trilingual inscriptions of two early Achaemenid kings, Darius I and Xerxes, as one of the countries (Old Persian) of the Persian Empire. In these lists of countries, the Old Persian name is Katpatuka, the land of beautiful horses.

History of Cappadocia dates back to Paleolithic Age. The prehistoric settlements of the area are Koskhoyuk (Kosk Mound) in Nigde, Aksaray Asikli Mound, Nevsehir Civelek cave and, in the southeast, Kultepe, Kanis and Alisar in the environs of Kayseri. First known local people in history of Cappadocia are Assurians, establishing trade colonies in Anatolia and formed first trade colonies. cave hotels of cappadocia.

This area with unusual topographic characteristics was regarded as sacred and called, in the Scythian/khatti language, as “Khepatukha” meaning “the Country of the People of the Chief God Hepat”. The tablets called Cappadocian Tablets and the Hittite works of art in Alisar are of the important remains dating from 2000s B.C. After 1200s B.C., the Tabal principality, of the Khatti Branches of Scythians, became strong and founded the Kingdom of Tabal. Following the Late Hittite and Persian aras, the Cappadocian Kingdom was established in 332 B.C. During the Roman era the area served as a shelter for the early escaping Christians. There are also several underground cities used by early Christians as hideouts in Cappadocia. After Romans, Cappadocia was under domination of Seljuk’s and Ottomans.

Cappadocia Region located in the center of the Anatolian Peninsula; in the center of what is now Turkey, with its valleys, canyons, hills and unusual rock formations. (Rose Valley, Love Valley, Monk’s Valley, Zelve Valley, Ihlara valley, Dervent Valley) you are able to see them through “red tour” and “green tour”. Cappadocia is surrounded by Aksaray, Kayseri, Kırşehir, Nigde and Nevsehir city where these rock formations are widespread as to the others.

The relief consists of a high plateau over 1000m in altitude that is pierced by volcanic peaks, with Mount Erciyes (ancient Argaeus) near Kayseri (ancient Caesarea) being the tallest at 3916 m. The boundaries of historical Cappadocia are vague, particularly towards the west. To the south, the Taurus Mountains form the boundary with Cilicia and separate Cappadocia from the Mediterranean Sea. To the west, Cappadocia is bounded by the historical regions of Lycaonia to the southwest and Galatia to the northwest. The Black Sea coastal ranges separate Cappadocia from Pontus and the Black Sea, while to the east Cappadocia is bounded by the upper Euphrates, before that river bends to the southeast to flow into Mesopotamia, and the Armenian Highland. This results in an area approximately 400 km (250 mi) east–west and 250 km (160 mi) north–south.

Due to its inland location and high altitude, Cappadocia has a markedly continental climate, with hot dry summers and cold snowy winters. Rainfall is sparse and the region is largely semi-arid to arid. But cave hotels can be

60 million years ago Taurus Mountains raised up in 3rd geologic age. Volcanos started erupting with the compression of North Anatolian plateau. Mount Erciyes, Hasandag and Golludag, between two of them, spumed forth lava to the region. Ashes collected in the plateau formed a soft ash layer. Upper side of ash layer was covered with a thin lava layer consisted of basalt in some areas. Basalt cracked and fell apart. Rains started eroding soft tufa by weeping through the cracks. Winds also took part in the formation. Consequently, cones with hard basalt hat came into existence. Local people gave a name to these interesting and different kinds of rocks: “Fairy Chimneys”. About Cappadocia Turkey

The region now is an attractive spot for tourists all around the world, there are many cave hotels and travel agency, many daily tours are organized daily, and most famous ones are “North tour and South tour. Cappadocia Turkey